Villanova University is proud to host the 2018 International Big History Association conference. The integration of the natural sciences, social sciences, and humanities has been central to the university’s mission from its beginning.  This is one reason why fourteen administrative and academic offices, departments, and programs at Villanova have offered their support of the conference. 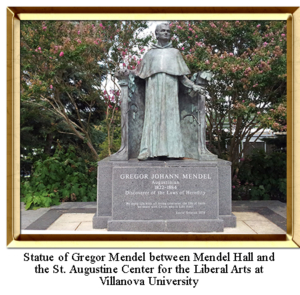 Our science building in the College of Arts and Sciences, which houses our departments of physics, astronomy, chemistry, biology, and computing sciences, is named for Gregor Mendel. Mendel was the nineteenth century Augustinian friar who is generally recognized as the founder of the modern science of genetics. He conducted his famous pea plant experiments between 1856 and 1863 in which he established many of the rules of heredity, now referred to as the laws of Mendelian inheritance. Each year, the university gives the Mendel Medal to an outstanding scientist.

Villanova’s Mendel Medal was given to the Belgian Catholic priest Abbé Georges Lemaître, Ph.D., D.Sc. in 1934 for his ground-breaking article on the primeval atom – what later became better known as the big bang.  He was the first to derive what is now known as Hubble’s law and made the first estimation of what is now called the Hubble constant, which he published in 1927, two years before Hubble’s article. His work was controversial at the time. Albert Einstein, who was committed to the steady state or eternal universe, told Lemaître, “Your calculations are correct, but your physics is atrocious.” Once Edwin Hubble’s observations confirmed Lemaître’s theory, Einstein accepted the new view of the beginning of our universe. As astrophysicists have honed Hubble’s Law, a beginning for our universe was dated at about 13.82 billion years ago. Big History begins with the “primeval atom” (even as we examine theories of the multiverse, cyclical universes, and other hypotheses).

The 1937 Mendel Medal was awarded to Dr. (Rev.) Pierre Teilhard de Chardin, S.J. for his work on key developments from the origin of the universe to the present and into the future. He argued that the universe had not been created originally as it is now, but that it evolved through stages. Big History investigates the periods of time from which there are transitions from one to the next.

The Mendal Medal was given to Dr. George V. Coyne, S.J. in 2008, when he was the Director of the Vatican Observatory.  His lecture at the award ceremony was an account that is familiar to big historians. In 2009, the award went to the evolutionary biologist, Kenneth Miller. Villanova’s astronomers and physicists teach and research the origins and evolution of the universe over the past 13.82 billion years.  Our earth scientists investigate the history of the earth since its accretion 4.6 billion years ago.  Our bio-chemists and evolutionary biologists in Mendel Hall work on the origins and evolution of life over the past 3.8 billion years.  Our departments in the humanities and social sciences pick up the story over the past thousands of years. The contributions to big history of all of these scholars have been of great importance – and make Villanova University a great place to hold the 2018 IBHA conference. 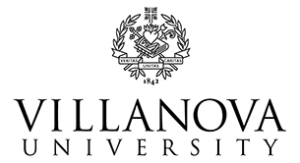 Villanova University is a Catholic Augustinian community of higher education, committed to excellence and distinction in the discovery, dissemination and application of knowledge. Inspired by the life and teaching of Jesus Christ, the University is grounded in the wisdom of the Catholic intellectual tradition and advances a deeper understanding of the relationship between faith and reason. Villanova emphasizes and celebrates the liberal arts and sciences as foundational to all academic programs. The University community welcomes and respects members of all faiths who seek to nurture a concern for the common good and who share an enthusiasm for the challenge of responsible and productive citizenship in order to build a just and peaceful world.  Villanova’s motto is veritas, unitas, caritas (truth, unity, love or caring). It seeks the unity of knowledge about what is as true as we can know it now – in the service of caritas, or caring about intellectual development, ourselves, human communities, the environment that sustains us, and all that is around, between, and in us.

St. Augustine (A.D. 354-430), in his work The Literal Meaning of Genesis (De Genesi ad litteram libri duodecim)* argued against a literal reading of Genesis, seeing it instead as metaphor.  His discussion provided a basis for Villanova’s tradition of interpreting Scripture in the light of scientific knowledge.  This is part of the complex set of sources of truth in the Catholic tradition; these include scripture, tradition (or the history of recognized interpretation of earlier sources, experience, and reason.  As Augustine wrote:

“Usually, even a non-Christian knows something about the earth, the heavens, and the other elements of this world, about the motion and orbit of the stars and even their size and relative positions, about the predictable eclipses of the sun and moon, the cycles of the years and the seasons, about the kinds of animals, shrubs, stones, and so forth, and this knowledge he hold to as being certain from reason and experience. Now, it is a disgraceful and dangerous thing for an infidel to hear a Christian, presumably giving the meaning of Holy Scripture, talking nonsense on these topics; and we should take all means to prevent such an embarrassing situation, in which people show up vast ignorance in a Christian and laugh it to scorn. The shame is not so much that an ignorant individual is derided, but that people outside the household of faith think our sacred writers held such opinions, and, to the great loss of those for whose salvation we toil, the writers of our Scripture are criticized and rejected as unlearned men. If they find a Christian mistaken in a field which they themselves know well and hear him maintaining his foolish opinions about our books, how are they going to believe those books in matters concerning the resurrection of the dead, the hope of eternal life, and the kingdom of heaven, when they think their pages are full of falsehoods and on facts which they themselves have learnt from experience and the light of reason? Reckless and incompetent expounders of Holy Scripture bring untold trouble and sorrow on their wiser brethren when they are caught in one of their mischievous false opinions and are taken to task by those who are not bound by the authority of our sacred books. For then, to defend their utterly foolish and obviously untrue statements, they will try to call upon Holy Scripture for proof and even recite from memory many passages which they think support their position, although they understand neither what they say nor the things about which they make assertion. [1 Timothy 1.7]”

The unity of knowledge through the sciences, history, and all disciplines is possible only through the type of intellectual exchanges that we anticipate in the 2018 IBHA conference at Villanova University.  We see the universe of knowledge as ultimately being in the service of caritas (caring or love within community).  We welcome big historians in this spirit and hope for a productive conference.

Technical Support
support@bighistory.org
We use cookies to ensure that we give you the best experience on our website. If you continue to use this site we will assume that you are happy with it.YES OK!
Go to Top