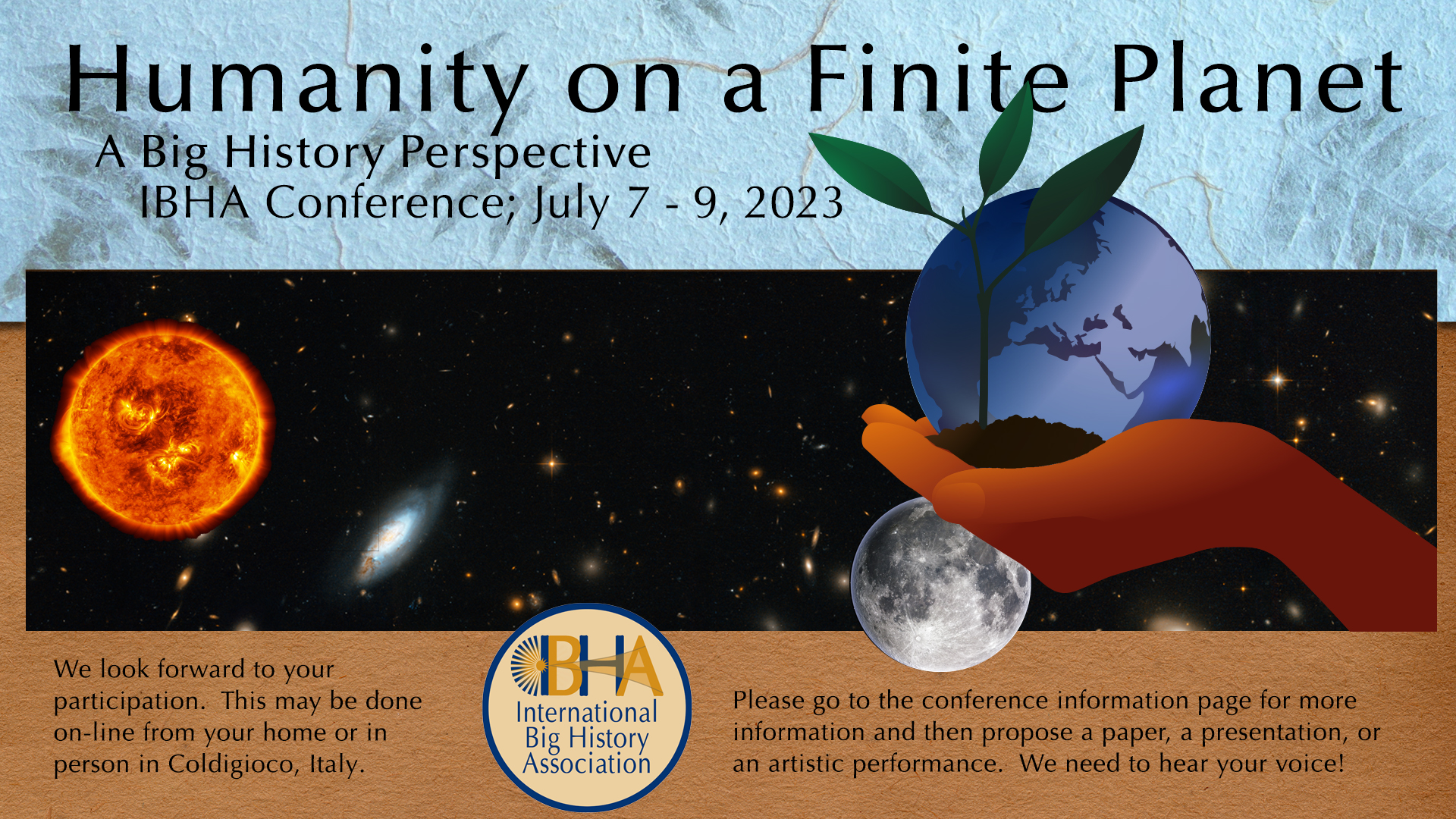 The 2023 IBHA Conference Theme on
Humanity on a Finite Planet: A Big History Perspective

The discipline of big history throws light on the achievements and challenges in the present and possibilities for the future by analyzing the biological, social, political and economic history of the homo sapiens in the context of the geological, climatological, environmental, and evolutionary history of the planet earth and the cosmological history of the solar system and the universe.

At this point in time, the human civilization is at a crossroads. The choices we collectively and individually make in the next decade or so will lock humanity into either a destructive or a sustainable pathway for our species. In big history terminology, we may have just entered or are about to enter a new threshold. While in the past, humans have progressed largely by following their survival and adaptation instincts, now as a global civilization, collectively we have a better understanding of the complex web of reality around us and therefore are in a position to make informed choices towards a desirable destiny.

We now know that we are living on a complex planet with highly interconnected planetary systems but finite material resources. Through the combined processes of biological evolution (a natural planetary process) and technological revolution (a human-induced process) we have become the ‘top predator’ in the food as well as materials chain on the planet. The concept of planetary boundaries – which are key planet-level processes that govern the stability and resilience of the earth in a form required to sustain humanity – was introduced by Johan Rockstrom, Will Steffen and collaborators in 2009 and further refined over the years.1 As per the current data available at least four of the nine processes are no longer in the ‘safe operating region’. In other words, at least some of the critical ‘Holocene’ conditions under which humanity thrived and progressed, no longer exist on the planet. The most widely discussed examples are global warming and loss of biodiversity.

However, from another perspective, over the past few centuries, we have also seen great strides in improving the quality of human life in terms of health and life expectancy, as well as the ways and means available to manifest, express and share human creativity and innovation in various forms. There are also innumerable localized examples of human communities achieving respectable quality of life in harmony with the localized planetary processes.

Where do we go from here? How do we put to use the positive outcomes of human endeavours to combat the potential negative outcomes? What should be the new direction given to human knowledge systems to ensure an equitable and sustainable human civilization that is more mindful of the limits as well as potentials of the planet earth and the solar system? What does the new planetary normal mean for the philosophical and spiritual frameworks developed by humans so far? How do we deal with the psychological impacts of the transformative change (either destructive or constructive)? Will the upcoming technological developments like human-AI interface, genetic modification, space travel, nanomaterials, etc., harm or help humanity? The conference will focus on exploring these and similar questions through multidisciplinary lenses.